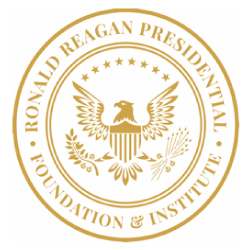 On the Anniversary of the November Pogrom (Kristallnacht), an Authentic WWII-Era Freight Car
Arrived in Simi Valley by Motorcade this Morning, Announcing the Exhibition’s West Coast Premiere

Simi Valley, CA – The Ronald Reagan Presidential Foundation and Institute announced today that they will host the world-renowned traveling exhibition “Auschwitz. Not long ago. Not far away.” The acclaimed exhibition, traveling from Sweden, is scheduled to open for its West Coast premiere on March 24, 2023. Tickets to the acclaimed exhibition are now on-sale at www.ReaganLibrary.com/Auschwitz and expected to sellout.

The Auschwitz exhibition, created by Spanish company Musealia together with the Auschwitz-Birkenau State Museum in Poland, will feature more than 700 original artifacts, the first of which arrived today.

A German-made, World War II-era, Model 2 freight car was escorted by motorcade today through Simi Valley and up Presidential Drive to the Reagan Library and was installed in the museum’s main courtyard. The procession was led by over 50 motorcycles, including those of the Patriot Guard Riders, veterans, and the Simi Valley Police Department who were on hand to offer remembrance.

Before World War II, this type of car was used to transport food, goods and livestock. During the war, cars like this were used to transport Jews, Roma, Poles and many others as part of forced resettlement or deportations to ghettos, execution sites, concentration camps, and extermination centers – including Auschwitz – established by Nazi Germany across occupied Europe. Up to 80 people along with their belongings would be crammed into each car for what was often a several day journey to a grim reality.

The West Coast debut of the 12,500 sq. ft. exhibition is the first of three final North American stops. This exhibition was made possible by our Presenting Underwriter Ambassador Gordon D. Sondland and other generous sponsors. The initiative to transport the Model 2 freight car was supported by BNSF Railway.

“We all owe it to the Holocaust victims – both those who lost their lives and those who were fortunate to survive – to show our respect,” said Auschwitz Survivor David Lenga. “We must remember them with dignity and gratitude and recognize the horror they endured. Survivors like myself need to know that our lives have meaning and that our community deeply cares about what becomes of us— that our suffering will never be forgotten.”

The event took place today on the anniversary of the November Pogrom (Kristallnacht). Eighty-four years ago today, Nazi leaders unleashed violence on the Jewish people of the German Third Reich that at that time included also annexed territories of Austria and parts of Czechoslovakia – attacking Jews in their houses, burning synagogues, and shattering over 7,500 other Jewish-owned commercial establishments.

“To echo the sentiment of Ronald Reagan’s remarks at the opening of the Washington, D.C. Holocaust Museum in 1988, this exhibition commemorates not only the immense loss during one of the darkest chapters in history, but also the necessary effort to keep the memory of the millions lost alive,” said John Heubusch, Executive Director of the Ronald Reagan Presidential Foundation and Institute. “I encourage everyone to see the Auschwitz exhibition and learn firsthand from some never-before-seen artifacts. We must ensure that such evil is never repeated.”

Hundreds of personal items such as suitcases, eyeglasses, and shoes that belonged to Auschwitz deportees will be on display in this exhibit, which will offer an audio tour in both English and Spanish. Other artifacts include: concrete posts that were part of the fence of the Auschwitz II-Birkenau camp; fragments of an original prisoners’ barrack from the Auschwitz III-Monowitz camp; a desk and other possessions of the first and the longest-serving Auschwitz commandant, Rudolf Höss; a gas mask used by the SS; and this original, German-made, Model 2 freight train car.

The exhibition was created by Musealia and curated by a panel of experts that included Robert Jan van Pelt (Chief Curator), Michael Berenbaum or Paul Salmons, working in close collaboration with Piotr Setkiewicz, head of the Auschwitz Museum Research Center. In addition to the hundreds of objects displayed from the Auschwitz Memorial, over 20 other international museums and institutions have participated with special loans, such as Yad Vashem in Israel and the United States Holocaust Memorial Museum in Washington.

About the significance of the exhibition today, Piotr Cywiński, Auschwitz Memorial Director said: “Russia’s barbaric invasion of sovereign Ukraine clearly shows how much the world needs historical memory to be a lasting and clear warning. Auschwitz was a far too painful experience, so the free world today could tolerate any symptoms of a policy of hatred, aggression, and dehumanization. Remembrance must be the key to building a peaceful and just world. This exhibition will help us shape this remembrance.”

“At the heart of this project is the idea of making accessible, to audiences all over the world, the history of Auschwitz in all its enormous complexity. Visitors will encounter Auschwitz as the site where one of the largest mass murder in history took place; but also as a symbol and manifestation of the limitless borders of human barbarism,” said Luis Ferreiro, Director of Musealia. “The exhibition will become a powerful opportunity for West Coast residents and visitors to understand how such a place could come to exist, and what that means for us today.”

Through a daunting selection of objects, the Auschwitz exhibition portrays the dark reality of the notorious camp, which remains a universal symbol of the Nazi horror. The curators reveal the world of Auschwitz, both its victims and perpetrators, with a clear goal: to elucidate how such a place comes into being. The exhibit forces its viewers to dig into how the Auschwitz existence and its role in the Holocaust has determined our present worldview and reminds us of our responsibility to keep such evil from ever resurfacing.

“Concentration camp operations forever shifted the foundations and perspective of humanity, and this Auschwitz exhibit ingrains in us that sinister period of time through the preservation and collection of what remains. History, especially its darkest moments, must be remembered and learned from,” said John Norman, President of World Heritage Exhibitions, who is presenting the exhibition locally. “Auschwitz. Not long ago. Not far away. is one of the most remarkable exhibitions to ever travel the globe, and it is a true honor to present the exhibition at the Ronald Reagan Presidential Library. We encourage patrons from across the region, and the world, to make it a point to come and see this awe-inspiring display.”

To learn more about this exhibit and purchase tickets before they sell out, please visit
www.ReaganLibrary.com/Auschwitz